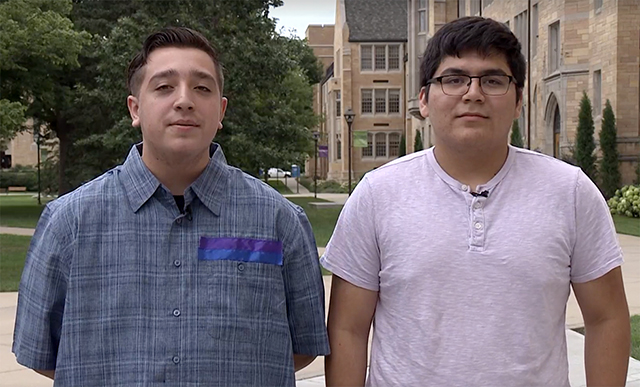 Isaac Santino-Garcia and Jaydin Fairbanks are camp regulars. During the summers, they attend the various media camps organized by ThreeSixty Journalism, such as the podcast camp and its reporter academy.

This year they were at the broadcast camp, where they worked on creating a television report. Santino-Garcia and Fairbanks delved into the subject of Native American boarding schools with their video.

Topics like this need more coverage, said Santino-Garcia, an incoming junior at Cretin Derham Hall High School. And the best way to tell stories about different communities is to engage those communities and lead the process.

Newsroom workers are more likely to be whiter and more masculine than American workers overall, and more than three-quarters (77%) of newsroom workers are white, according to Pew Research Center. ThreeSixty Journalism has been around for over 20 years, partnering with the University of St. Thomas on a mission to change the way newsrooms look and the stories that result.

Santino-Garcia, who is Dakota from Lower Sioux and White Earth Ojibwe, and half Mexican, thinks ThreeSixty prioritizes underrepresented and marginalized voices.

“Every story I’ve seen or at least heard of (on the show) has been about someone who’s not white and a story that may not have been told. regularly,” he said.

For Samantha HoàngLong, a graduate of the program, being surrounded by so many children of color was uplifting.

“It was like the first space to be such a young space with a class full of people who are also young journalists of color,” she said. “I feel really lucky to have been in a class full of diversity at this young age.”

How to Increase Newsroom Diversity

Part of bringing diversity into newsrooms is creating an “incentive,” said Chad Caruthers, executive director of the journalism program. ThreeSixty also helps by providing stipends to participants for their time and labor.

“That was the only reason (I was there) at first, but then I kept doing other things (camps) and I stayed because I always liked it,” said Fairbanks, who will be a senior at Osseo High School.

The stipend allows people from various socio-economic backgrounds to participate without the financial pressure of loss of income for a few weeks.

“As students get older in high school, they work more, they have to support their families, they have to support themselves no matter what. Going to a one-week or two-week program in St. Thomas during the summer means they don’t work during that time,” Caruthers said. “If that’s not extra money in their pocket, we hope it will replace any income they lose by joining us.”

Because of the program, some children plan to study journalism or some form of media. Santino-Garcia wants to attend St. Thomas, where ThreeSixty is offering a four-year scholarship.

“I love learning new things, and journalism gives me good life experience that you might not learn anywhere else,” Santino-Garcia said. “It just fascinates me because I can go out and tell other people’s stories that may not have been told.”

HoàngLong graduated from high school in 2017 and participated in several ThreeSixty camps, including the TV broadcast camp. She started with college essay boot camp in 2016, which sparked her interest in writing. She enjoyed it so much that she changed her career trajectory.

“I actually wanted to be a dentist before that. I was like applying to college with biology and biochemistry, and I was ready to go to dental school. And then I did this camp,” she said. “I learned that you can talk to people to earn a living and learn what they are doing. I thought that was really cool, so I kind of stuck with it.

After graduating from high school, she interned for ThreeSixty Journalism and learned more about video production. She received a four-year scholarship from ThreeSixty to study communication and journalism in St. Thomas.

At the most recent camp, Babs Santos of Fox 9 and Jeff Wagner of WCCO taught students how to speak on air and how to structure a story. Another element of the program, HoàngLong said, was a visit to a press room.

HoàngLong enjoyed seeing what happens behind the scenes in a newsroom.

“I think that experience right after high school gave me an advanced sense of what it could be like if I worked in that job,” she said. “Being able to access the newsrooms and browse through them was really cool. That’s what made me want to get into broadcasting.

She then interned at Fox 9, then worked there after graduating from college. She is now part of the Sahan Journal audience team.

ThreeSixty recruits potential participants, but also partners with various schools that identify students who would be a good fit for the program. It offers seasonal journalism workshops throughout the year and one camp per week during the summer.

But the pandemic has reduced this figure to between 50 and 75%.

“The hardest-to-reach students have, in many cases, become harder to reach during the pandemic,” Caruthers said. “You look at all the gaps that many of us hear about in terms of education gaps, health disparities, etc. Technology gaps are significant, and this is one of them. When everything went virtual, we had to do the same, and unfortunately not all of our students have equal access to the technology that was required. »

Of the total attendees, about 10% pay to attend, Caruthers said. It is able to do this through partnerships with the Blue Cross Blue Shield Prevention Center, which funds projects and helps with topics. Blue Cross Blue Shield is a sponsor of MinnPost’s Race and Health Equity Fellowship, but has no say in editorial content.

People who attended ThreeSixty went on to work in newsrooms across the state. Some alumni are now at the Star Tribune, Fox 9, Sahan Journal and MPR, among others, Caruthers said.

MinnPost’s in-depth, independent news is available to everyone for free – no paywall or subscription. Will you help us keep this going by supporting our non-profit newsroom with a tax-deductible donation today?