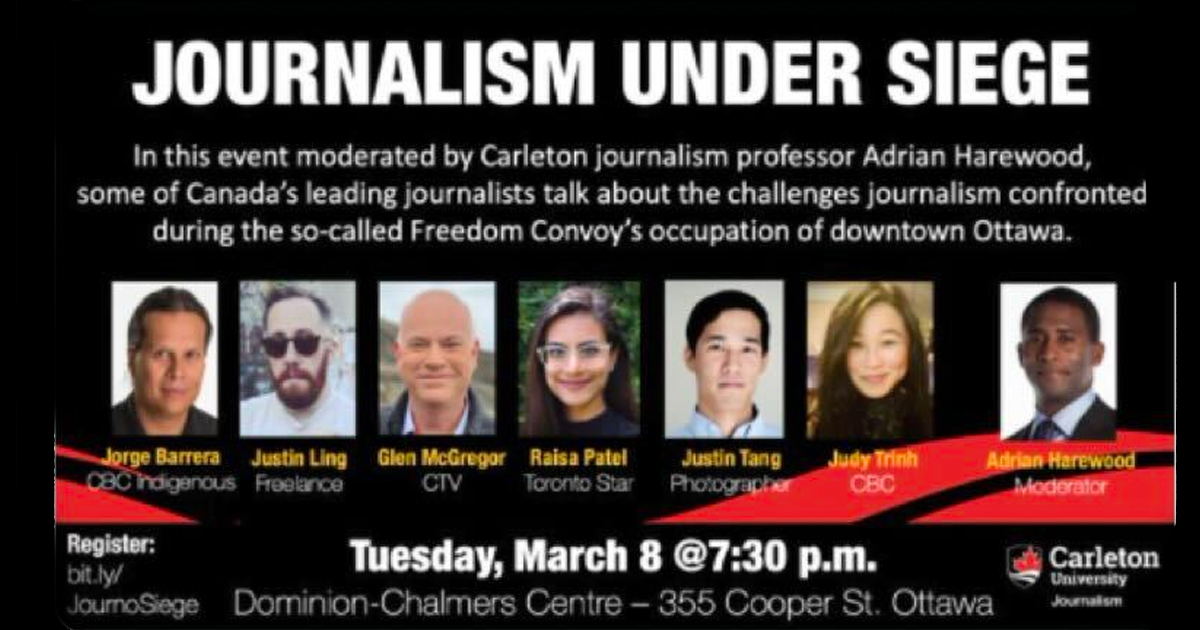 Carleton University’s School of Journalism will host a roundtable on Tuesday with members of Canada’s mainstream media to discuss their role in covering what the school calls “the siege of Ottawa.”

The University of Ottawa describes its event – titled “Journalism Under Siege” – as “one of the first public events to reflect on the role of the media during the unprecedented occupation of downtown Ottawa.”

Panel members are expected to discuss the challenges journalists have faced while covering the Freedom Convoy. Members of the public will also have the opportunity to contribute to the discussion.

The Carleton University event was criticized for its apparent exclusion of center-right and independent journalists, who played a crucial role in coverage of the Freedom Convoy.

True North’s Sue Ann Levy called out Carleton University on Twitter, saying the school – her own alma mater – taught her “how to get both sides of the story”.

Levy added that the panel is “just a giant echo chamber that will reinforce their narcissistic view of their own importance and the very pack mentality that has led to ‘bad words’ being thrown at them during freedom protests. “.

True North has learned, however, that a centre-right journalist was invited to participate in the panel, but only after initial information about the event was released.

Columnist Rupa Subramanya, who contributes to the National Post, the Wall Street Journal as well as other outlets, told True North she received a belated invitation to join.

Subramanya said she asked organizers why she received a late invitation, for which she was told the event was organized quickly. He was also told that other panelists had recommended his participation to the organizers.

Subramanya told True North that she was apologized for the late invitation, but has yet to agree to attend due to scheduling issues.

The Freedom Convoy has changed the way Canadians view legacy media, due to coverage that many consider one-sided.

Mainstream media reporters often repeated talking points similar to those of Prime Minister Justin Trudeau, who claimed the movement had racist elements and that peaceful protests were violent and illegal.

This misinformation led the organizers of the Freedom Convoy to ban outlets like the CBC and the Toronto Star from some of their press conferences.

The Carleton media event is set to take place at the Dominion-Chalmers Center in Ottawa, which was previously owned and operated by the United Progressive Church of Canada, which still hosts a congregation in the building.

Despite Ontario lift most of its COVID-19 restrictions, including the vaccination passport, those who wish to attend the event will always have to present proof of double vaccination. Face masks will also be mandatory.

We ask readers, like you, to make a contribution to support the factual and independent journalism of True North.

Unlike mainstream media, True North does not get a government bailout. Instead, we depend on the generosity of Canadians like you.

How can a media outlet be trusted to remain neutral and fair if it receives government assistance? We don’t think they can.

This is why independent media in Canada is more important than ever. If you can, please make a tax-deductible donation to True North today. Thanks very much.