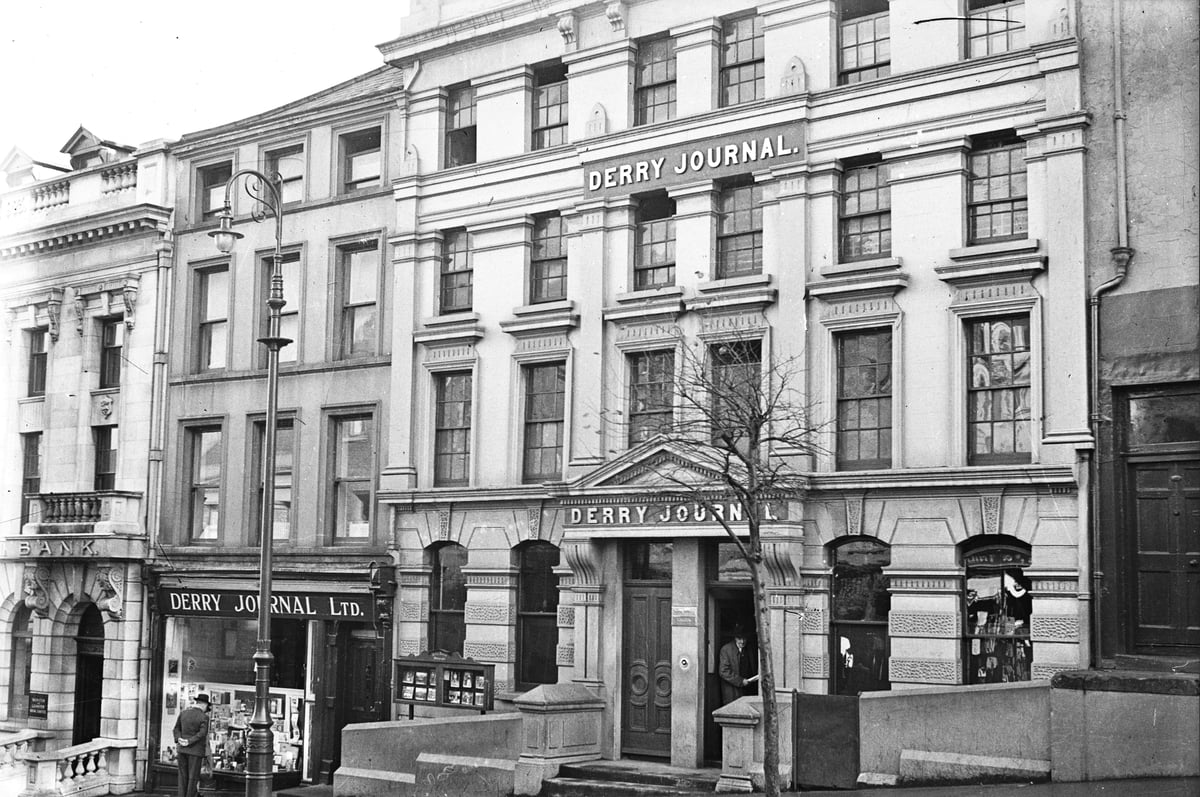 Nor could this lively Presbyterian editor have imagined the important role the Journal would play in the lives of generations of locals, much less that it would undergo a radical transformation into a mouthpiece for nationalists in the following a succession of political earthquakes that changed the course of Irish history.

The first edition of the Journal was published on June 3, 1772, at Mr. Douglas’s own business premises in the downtown Diamond district. Already an ancient city at the time, Derry was a vibrant and important trading port, with a booming shipping industry and a fledgling linen industry, would be a precursor to the textile factories which, over the next two centuries, would supply jobs and a source. income for hundreds of thousands of local women and men over generations.

Just over a century after the siege of Derry, the city in the 1770s was on the surface a much more settled place, where trade flourished and markets were held in the Town Hall Exchange, then located on the Diamond . The colorful Bishop Frederick Augustus Hervey had been installed as CoI Bishop of Derry, settling in what is now Masonic Hall with its extensive gardens (now the Bishop Street car park). It was this bishop who built Downhill and the famous Mussenden Temple on a cliff overlooking Benone and Lough Foyle, and who is perhaps best known for his conciliatory stance towards the indigenous and largely Catholic population of the wider region. While St Columb’s Cathedral was already completed and firmly established within the city walls, the foundations of the Long Tower Church of St Columba would be laid 12 years after the Derry Journal was founded.

The church project was spearheaded by native and local Dungiven priest, Father John Lynch, who lived off Ferguson’s Lane. The Roman Catholic Bishop of Derry during this period was Dr Phillip McDevitt, a native of Fahan, who was installed six years before the Journal was founded, and lived in Moville and also in Clady outside Strabane, as shown on the Long Tower website. In a cross-community gesture, Protestant Bishop Hervey donated £100 towards the construction of Long Tower Catholic Church, which was built on the site of a once massive cathedral for the parish of Templemore next to a ancient round tower, with links to the 6th century and St Columba.

Ireland had been a dangerous place for a Catholic clergyman in the 18th century under the violent repression of penal laws. Indeed, people could and would be persecuted, hunted and killed just for celebrating mass, including Father James Hegarty, a native of Moville and parish priest of Fahan, who earlier in the 18th century was beheaded and buried on the banks of Buncrana at the place still known today as Fr Hegarty. Rock.

While there was widespread poverty at the time for the more affluent, life went on as it had. Boom Hall in 1772 was acquired and rebuilt by James Alexander (later to become MP for Derry and whose descendant would marry Cecil Frances Alexander) together with lands in Moville, while Prehen House was in the possession of the Knox family and Elagh Castle – once a stronghold of the O’Doherty clan – was already in ruins. His tower can still be seen today above Buncrana Road near the border with Bridgend.

Beyond the bustling streets of Derry’s commercial center, tensions were boiling here as elsewhere in the world, but towards the end of the 18th century. Revolution was in the air. Across the water in England, King George III was on the verge of a series of disasters in the New World, with revolts against taxation and the Crown leading to the American Declaration of Independence in 1776 The following decade would see the French Revolution and subsequent execution. of King Louis XIV and Queen Marie-Antionette. Here in Ireland, the disenfranchised and dispossessed Irish native population and Protestant dissenters were beginning to organize again in various forms as the cause of national resolve slowly took hold. And it is in this climate that Wolfe Tonne, who imposed himself.

Some of the first pages over the years. These are among those featured in the Derry Journal exhibition currently running at Foyleside.

The course of the next 200 years of conflict, resistance and turmoil need not be repeated here, but the Journal was there through it all, documenting the various twists and turns of international and local affairs, and speaking out for itself- even in favor of the Catholic Church. Emancipation. Indeed, a century after its founding – as the Journal’s history details later in this edition – the paper adopted an Irish nationalist editorial stance and dropped the London prefix from its name.

The Journal carries a number of accolades and has a long and proud history of serving the North West region. The imposition of a border never changed that and a century of partition the Journal still serves populations on both sides of the border in the northwest today.

In many ways the Journal is the story of the people of the North West, their histories, their triumphs and their tragedies, even listing in its first editions the many people who left Ireland on board a ship on the docks of Derry in search of a better future. for themselves and the families they could send money to if they found work, relatives that generations of them would never see again. At places in Inishowen and other areas there are still mounds of rocks today which, as some of you know, are very special. These are the stones that people brought to specific sites each year to represent their distant loved ones, the locals who had made this journey to an uncertain fate, often with little or nothing to their name. The Diaspora of Derry, Donegal and Tyrone and indeed the rest of Ireland have been a powerful support to our people over the centuries and the people here have never forgotten them.

The advent of the Internet has allowed us to stay connected like never before, and it’s great to see people around the world with connections to or from here reading the Journal online or subscribing.

In the Buncrana Road Journal office in 2001.

Like many of you, I grew up with the Journal, and like many of you, I was featured in it many times growing up. From my grade 1 class to high school photos, photos of Derry Feis, being caught for a vox pop on the street, formal school and graduation photos. The giant Friday newspaper is where I found my first apartment, where I searched for the cheapest cars I still couldn’t afford in the classifieds, found out what was going on this weekend- end. The Journal has been a part of life here for generations, even hosting dances in times gone by.

I started working as a junior journalist at the Journal at the age of 22, after graduating in Liverpool followed by a journalism course at the North West Institute of Further and Higher Education, taught by lecturers such as Suzanne Rogers, Kevin Logue, Christine Mitchell, a course that has placed generations of locals on media career paths. I had worked shifts elsewhere and had already applied unsuccessfully, but the Journal was still the official newspaper in those areas and I was happy to work there full time. It was 1999, a year after the Good Friday Agreement, and it was at Buncrana Road. Many of us came at that time, including Erin Hutcheon, Claire Allan, Eamonn Houston, Ian Cullen and Linda McGrory. It was a busy and open workplace, with different departments all working side by side. I have fond memories of staying there for those three years and of the kindness and generosity of many of the more experienced staff. We learned a lot from them. In life you always remember the people who have helped you, the people who really care about others, whether it is a teacher, a colleague or a mentor, and I would like to thank here the late Siobhan McEleney as well as Mary McLaughlin, Arthur Duffy, the Journal reporters, photographers, production and office staff who went out of their way to help new recruits like us get their bearings and understand what was the newspaper.

I was there when the internet arrived, when the first cell phones were distributed, when Derry rang in a new millennium for ‘The Final Countdown’ in Guildhall Square, I was there when 9/11 happened. It was a different landscape and, as editor Pat McArt often reminded us, the stories weren’t walking on the legs anymore. I remember trying to come up with ideas for different features, including staying in supposedly haunted local places overnight and finding myself terrified at a particular location. We were young, new and trying anything. And we had a stable salary (not a lot of course, you’ll never be rich at this game, but it was something). I decided to save a bit and follow in my brother’s footsteps and go travel to distant places and left the Journal at the end of 2002. I wouldn’t be back here until 2014 and despite having held many jobs since my teenage years, in chip shops in Creggan and Rosemount, as a housekeeper, invigilator of exams, in an inn, fruit picking, call centers, off licenses, Desmond’s factory canteen, furniture removals, student union, Dunnes, Argos, lecturing at the NWRC and other newspapers, coming back to the Journal always felt like coming home.

I would like to thank all the staff, past and present, who contributed to this special edition. It hasn’t been easy in the midst of an office move, and with a much smaller team than we had in the days of the massive Friday papers, but their stories, their efforts underscore the sense of pride and relationship among people who worked at Journal feel.

And there is also a sense of belonging among the readers. It’s your newspaper and your website just as much as ours. We’ve been telling your stories and the history of Derry, Donegal and the North West for 250 years. Thank you to all of our readers and advertisers for trusting us and helping us support and inform our community over the years, and as we enter a new era in our new office on the first floor of the Catalyst Building in Fort George, hopefully we can continue to do so for generations to come.