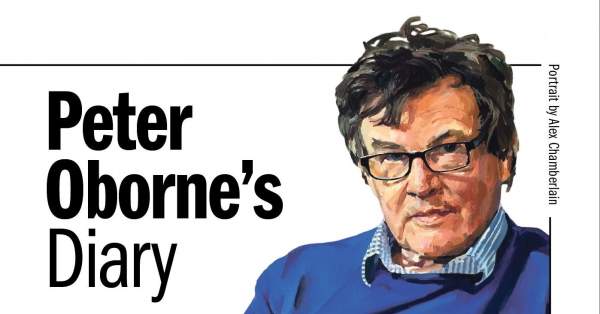 Exclusive to print for a month, Peter Oborne shares his observations of the political media class. For the latest newspaper, subscribe to the October digital edition

SEVERAL FACTORS ARE COMBINED to plunge Boris Johnson into the dangerous political crisis he faces this fall. A lack of general purpose and direction, added to the poisoned rift between Downing Street and the Treasury, creates the feeling that the government is falling apart.

This poses a serious challenge for the press management system installed after Dominic Cummings left nine months ago.

Cummings operated through favorites including Laura Kuennsberg of the BBC and Robert Peston of ITV, before losing in a high-profile power struggle against Carrie Johnson, the Prime Minister’s wife (and a public relations professional) .

Since then, the circle of privileged reporters has shrunk further. The most important is the SunHarry Cole’s political editor. Again and again, Cole gets early access to the most important public announcements (three major examples this year are the Defense Review, the Government’s Immigration Announcement, and the Budget). A second member of the inner circle is Politics reporter Alex Wickham (according to Spectator, Wickham is the godfather of Boris and Carrie Johnson’s son, Wilfred). Cabinet ministers read it with great attention because (they say) it articulates the Downing Street line so tightly. He led the way with attacks on Foreign Secretary Dominic Raab and recently produced a spectacular if (in my opinion) distasteful scoop exposing the granular details of the plan for ‘Operation London Bridge’ – the death of the Queen .

This system of favoring journalists close to the Johnson arouses resentment. Formerly loyal newspapers feel left out. It may not be a coincidence that Associated Newspapers and the Telegraph, fabulously loyal for so long, began to attack the Prime Minister

IN THE ERA OF CUSTOMER JOURNALISM, the most revealing stories come from outside the mainstream media.

Thanks to Health Services Journal – which covers the NHS – we’ve learned the sordid details of exactly how Boris Johnson plans to get away with his deceptive plan to build ’48 new hospitals’. Of course, the figure is a fabrication. Instead, in an Orwellian twist, officials were ordered to change the meaning of the word “hospital.” Renovations, reconstructions or new wings are now classified as hospitals. It’s like a used car salesman who puts on a dab of paint and a new gearbox, then passes a used car off as new.

We learned of this calculated deception from HSJ reporter Dave Ward, who revealed the existence of a Department of Health publication titled “New Hospitals Program Communications Playbook.”

The “playbook” states that “the diagrams named in the advertisement are not all the same and vary depending on a number of factors. However, they all meet the criteria we set for what a new hospital is and therefore should always be designated as a new hospital â€.

At best, only about 15 of these 48 hospital plans can be classified as â€œnew hospitalsâ€ in the ordinary sense of hospitals that did not previously exist.

Ward’s scoop raises troubling questions about the politicization of public servants. Needless to say, his revelations were largely ignored by the newspapers which loudly amplified Boris Johnson’s fabrications about building a hospital.

THE SUCCESS OF THE TALIBAN is comparable to both Brexit and Donald Trump. The movement expresses the resentment of small towns and countryside against foreign domination and metropolitan values.

I have never forgotten my conversation with a doctor from Kabul who lived and slept in the hospital where he worked and who kept a loaded pistol next to his bed. He had been forced to take these precautions after being kidnapped on his way home from work by bandits posing as intelligence agents. They took him to an underground dungeon where they tortured him for three weeks. As the beating continued, the bandits held a cell phone to his mouth so that his family members could hear his cries of pain. Then at night the bandits handcuffed his hands behind his back and hung him from a hook in the ceiling. His captors had political protection and he directed me to many others who had suffered similarly. â€œLife was much better under the Taliban,â€ he said. â€œSecurity was 100% in Kabul during the Taliban era. “

All businessmen, without exception, have told me the same thing. They had no desire to return to the beatings, beheadings and religious fanaticism of the Taliban regime. Yet they viewed this brutal regime as preferable to the chaos, lawlessness and lawlessness that followed it.

No wonder Afghanistan has fallen.

I first met racing journalist ALASTAIR DOWN in 1989, the year Desert Orchid won the Cheltenham Gold Cup. Now he is retired. His last column began: â€œThis is a very simple thank you letter from a man who was fortunate enough to never do a single day of work in his life. ”

When asked if he would do it again, Alastair replies: â€œI would have liked to study law, be a history teacher or, perhaps above all, a trawler captain.

Alastair Down was the greatest racing columnist of all time – and an even better writer than his former colleague Jeffrey Bernard. There is no greater praise.

OUR JOURNALISM COUNTS ON YOU

Thank you for reading this article

A new kind of newspaper – independent, fearless, outside the system. Fund better media.

Our main investigations include Brexit, the Empire and the Culture Wars, Russian meddling, the coronavirus, cronyism and far-right radicalization. We’re also introducing new color voices in Our Lives Matter.