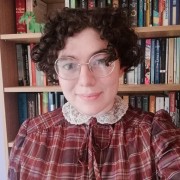 A college student who moved to a remote island chain without a job landed a role reporting on his communities for a regional daily.

Eve Mclachlan moved to the Western Isles of Scotland to support her friend, who had found a job locally as a vet and feared feeling isolated.

Eve, pictured, completed a Masters in Playwriting from St Andrew’s University via distance learning after moving house, but was unsure what to do next.

However, she has now been engaged in remote communities to cover remote island communities after an expansion of the community news project administered by the NCTJ.

As part of the scheme, the 24-year-old works for the Aberdeen-based daily, The Press & Journal, with funds provided by Facebook owner Meta.

She said: “I finished school and then spent about a year doing freelance work and really trying to make it as a writer.

“The Community Reporter role was advertised on Facebook and my roommate showed it to me. I applied and was totally amazed when I got the job.

“I’ve always been interested in writing and the fact that I could start journalism from scratch and take this training was awesome.”

The Community News Project was set up in 2018 to help regional newsrooms cover underserved communities across the country.

As part of the program, Eve will now train for an NCTJ degree with Glasgow Clyde College one day a week.

Four journalists working for Reach plc on the program have also held permanent positions with the company.

Naomi de Souza recently became a senior reporter at BirminghamLive, having started her career as a community reporter in Coventry, while Maisie Lillywhite left Gloucestershire Live to become a television and celebrity writer at Bristol Live.

Lisa Letcher and Nicole Goodwin have also been promoted to senior reporters at Cornwall Live and Newcastle The Chronicle respectively.

Journalism student who wrote for Stroud News & Journal dies at 23

We will embrace the rise of individual journalism: co-founder of Semafor