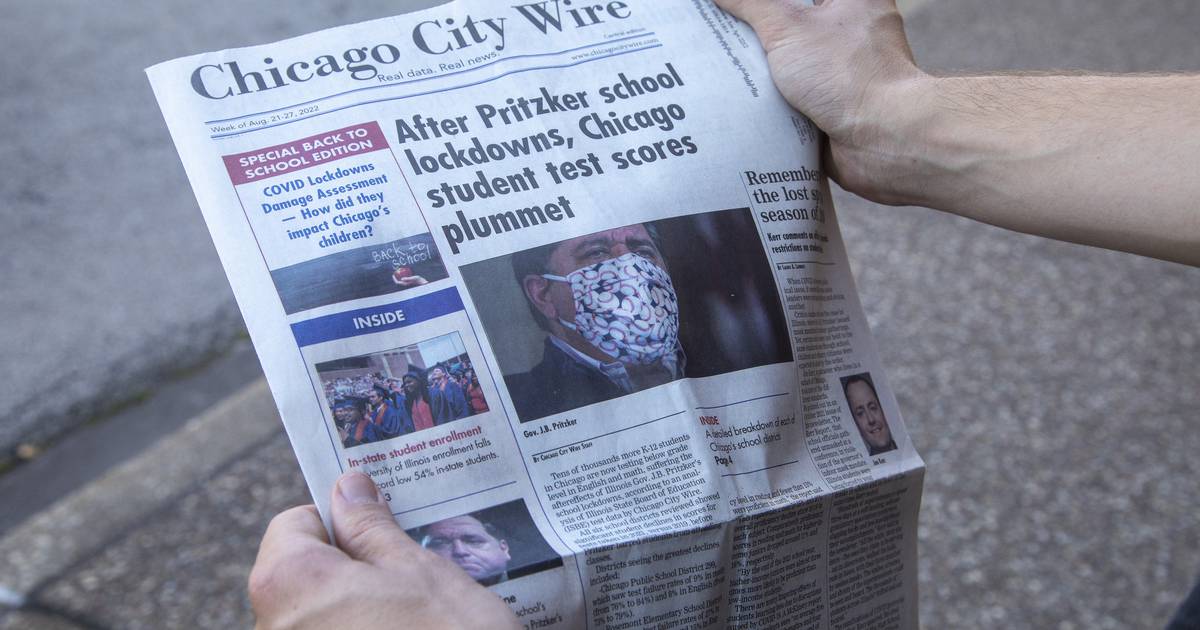 The best way to drive out fake news is to get more and better real news.

That’s the conclusion that came to mind with the announcement this week that the Robert R. McCormick Foundation has committed $7.5 million to three nonprofit news organizations and one of the top journalism schools in the country.

I couldn’t help but consider this development in contrast to the broadsheet that once again landed on my doorstep this week – thanks to media message manipulator Dan Proft.

McCormick’s commitment is in addition to the $10 million the foundation earmarked earlier this year for my organization, the Better Government Association. And that, in turn, followed the $61 million invested by investor Michael Sacks, the Pritzker Traubert Foundation, the John D. and Catherine T. MacArthur Foundation and others to help radio station WBEZ merge. with the Chicago Sun-Times.

All of this money goes towards expanding and strengthening the news media in the city of Chicago and throughout the state. The engagement comes at a time when the notion of objective truth is openly under attack, and the persistent barrage is eroding the foundations of our democratic system.

Money makes a huge difference. And the publication of truth in the form of journalism cannot come soon enough. The fate of our digital public square in Chicago and throughout Illinois depends in large part on our ability to produce more accurate, accurate, and incisive information.

That’s because the big contributions come just as Illinoisans are currently being targeted by a fake news writer called People Who Play by the Rules PAC. The group is led by Proft, a failed political candidate turned Roger-Stone impersonator who moved from Illinois to Florida but keeps some of his media shenanigans parked here at home.

This is not Proft’s policy. People of goodwill can respect political views, both liberal and conservative. But disregard for the truth – Proft’s palette of choices – is something we should all call out and loathe, regardless of our personal politics.

Proft’s stable, made up of leaflets clearly resembling dummy newspapers, has been dumped on doorsteps in Northern Illinois – much like poison candy left in a bucket on the porch for unsuspecting cheaters . Except that the purpose of his ersatz infobombs is not to poison the stomach but the mind.

The name of the PAC’s publisher – “Play by the Rules” – itself is a non-truth. When it comes to large flyers, a core tenet of his business strategy seems to be, “Break all the rules you see.”

Being honest with readers? Broken. Adhere to the facts? Broken. Be a positive force in the community? Broken.

Proft’s business is a COVID-like contagion, hurting everyone who comes across it. No wonder he’s so down on people wearing masks.

Take Paddock Publications, publisher of the suburban Daily Herald. Its reputation is in tatters after a rash decision to print the Proft mega-tracts.

Proft is also not limited to printing wide pages on large format. His Twitter feed deals with adjacent racist ramblings. He refers to Illinois’ bail reform law, the SAFE-T Act, as the “Pritzker Purge Act.” This invokes the “Purge” film series that traffics in white nationalist and anti-immigration tropes.

Governor JB Pritzker, who is heavily targeted in the mega-tracts, recently commented on the forged papers. “If you look at what he printed, it’s clearly the idea that, again, what he prints, that black people are threatening your way of life. That’s basically what he puts in these posts,” Pritzker said.

Proft isn’t exactly on the right track in his replies to Pritzker. In one, he refers to Pritzker as “JBelly”. This is an apparent reference to Pritzker’s plus-size construction. Very classy; pure prof.

When the reader of a real newspaper sent a letter to the editor expressing concern for the well-being of an accused criminal, Proft struggled to show his compassion. “Chicago’s Culture of Death Illustrated,” he tweeted. “Prey identifying with their predators.”

When a half-truth or an outright lie appears in a large Proft format, it’s not a defect, it’s a feature. In this sense, the form and function of Proft fake newsprint present a challenge to the very idea of ​​truth. Its tracts undermine the principles of political dialogue, and the damage they cause to our democracy is becoming increasingly evident over time.

Unlike Proft — in a way that puts the intent and effect of its broadsheets to shame — the nonprofit news outlets that got money from the McCormick Foundation strive to publish objective facts in an engaging way. They dig for the truth and would never sanction an effort to manipulate it, as the Proft pamphlets do.

Their good journalism will not supplant Proft’s trickery. If the pandemic has taught us anything, it’s that virulent viruses mutate. But real reporting can stand in contrast and expose the contents of Proft’s suit for the counterfeit concoction that it is.

Mark Twain is quoted as saying that a lie goes around the world and comes back while the truth always tries to tie its boots. It would be good for all of us, regardless of our politics, if Dan Proft’s published lies, disguised as news, made it to the other side of the world – and stayed there.

David Greising is President and CEO of the Better Government Association.

Submit a letter of no more than 400 words to the editor here or email [email protected].