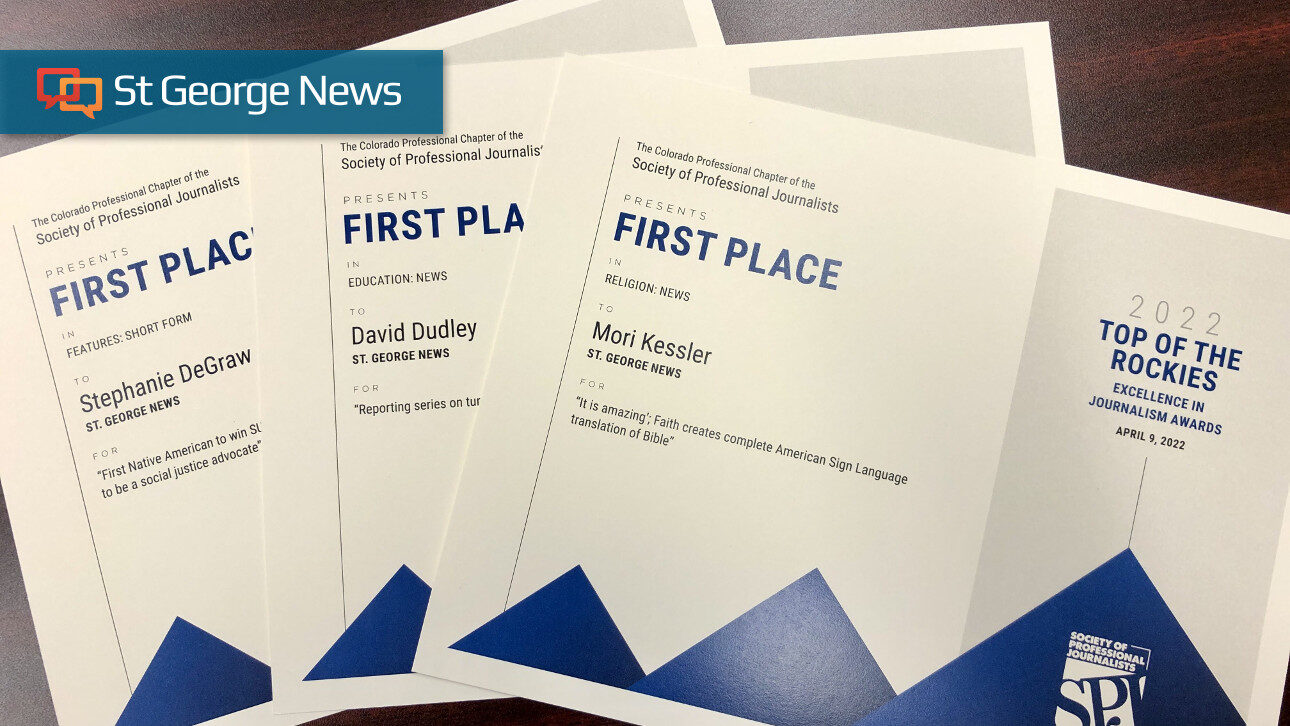 ST. GEORGE- In an exhibition of the high-quality work St. George News is known for, eight writers won more than a dozen awards in the 2022 Top of the Rockies Excellence in Journalism competition.

St. George News was among 75 media outlets that entered the contest across Utah, Colorado, Wyoming and New Mexico. With over 1,500 entries in this year’s contest, it was the most competitive yet, and the St. George News team was rewarded with a record 13 major newsroom division prizes for articles published in 2021.

Among the winners were three winners in the education, religion and writing categories.

“We couldn’t be more proud of the work our incredible reporting team delivers day in and day out, and the results of this competition are testament to the high standards we hold ourselves to,” said St. George News Editor-in-Chief Joseph Witham. “Our commitment to providing hyperlocal news and information to the Southern Utah community has never been stronger.”

The awards were announced Saturday at a reception at the Denver Press Club in Colorado, and St. George News was in attendance alongside the Salt Lake Tribune, Albuquerque Journal and Denver Post.

“Top of the Rockies features the best in journalism of 2021, and it’s clear that reporters in the four-state area are doing a great job,” said contest coordinator Deb Hurley Brobst. “Each year, I am thrilled with the quality of reporting, feature writing, photography and design that takes place in cities of all sizes across our region.”

Senior reporter Mori Kessler won first place in the religious news category for an article exploring the translation of the Bible into American Sign Language. Kessler’s multimedia story chronicles the efforts of Jehovah’s Witnesses to bring the scriptures to its deaf members.

“A fascinating look at something hearing people don’t think of,” a contest judge said of Kessler’s work. “Interesting story told in an interesting way.”

“This article does what a great profile story should do: it helps the reader understand what makes a person tick,” a judge said of DeGraw’s story. “It offers context coupled with insightful quotes to show the reader why Mahala Sutherland is a passionate advocate for social justice.”

Former journalist David Dudley was honored with first place in the education news category for his investigation into the firing of the principal of Tuacahn Arts High School. Dudley’s series of investigative reports uncovered problems within the nonprofit arts organization that extended far beyond the school.

“Throughout this series, David Dudley has done a phenomenal job investigating the reform of Tuacahn Arts High School, from the questionable dismissal of its beloved principal to the rebirth of the school in a new location under a new name,” a pageant judge said. . “The reporter clearly spent time submitting requests for recording and conducting follow-up interviews with everyone involved to find answers.”

In the Best Journalism Solutions category, healthcare journalist Chris Reed won second place for his in-depth look at Southern Utah patients with long-distance COVID. Reed also took second place in news obituaries for his tribute to the life of Dr. Craig Booth, a beloved and influential figure in the St. George community.

Crime reporter Cody Blowers won second place for her coverage of criminal proceedings related to a horrific DUI accident that resulted in the loss of two limbs. The prompters followed the story every step of the way, from the day of the incident to the sentencing hearing.

In addition to his first place finish, Kessler received two second place awards. In the religion news category, he was recognized for his profile of the Orthodox Christian community in southern Utah. In political reporting, he was rewarded for his interview with a local veteran after the US withdrawal from Afghanistan.

Dudley received third place in the legal features category for his review of Utah state policy on the death penalty.

Witham won third place in the headlines category for a collection of headlines he wrote for articles published throughout 2021, such as “No threat from giant hornets in southern Utah, but there are other bugs to worry about.”

In addition to her second-place finish, Torribio was rewarded with a third-place finish in the education news category for her coverage of the fallout stemming from a controversial letter released by the National School Board Association calling some parents “domestic terrorists.” .

This year’s winners were among a plethora of other award-worthy stories that the dedicated team of reporters, videographers and editors at St. George News strived to deliver to readers across the south. Utah and beyond. Subscribe to the St. George News newsletter for free, daily access to the best local news, sports and information programming.