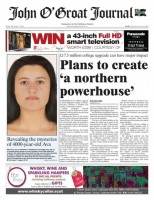 Mainland Britain’s most northerly newspaper is among the contenders for a prestigious regional media award.

The Scottish Press Awards have unveiled the shortlist for their Weekly Newspaper of the Year category, with the John O’Groat Journal among the nominees.

The Journal will face competition from the defending champion, the Lennox Herald, as well as the Ayrshire Post, the Largs and Millport Weekly News and the Inverness Courier.

The winner will be announced at the 43rs Scottish Press Awards ceremony, to be held on September 21 at the DoubleTree by Hilton Glasgow Central.

Denise West, Chair of the Scottish Press Awards Jury, said: “The quality of the entries was higher than ever, and a tremendous reflection on the skills and efforts of journalists and editors across Scotland to meet the challenges not declines faced by the sector.

“The judges had a tough job producing the final shortlist and I thank them all for the rigorous manner in which they rose to the challenge.”

John McLellan, director of the awards organiser, the Scottish Newspaper Society, added: “As always, the Scottish Newspaper Society is extremely grateful to Denise and all of our judges for dedicating their valuable time to selecting our finalists, as well only to our sponsors and program coordinators. Consultants Scotland without whom the awards wouldn’t be the huge success they are.

Most of the shortlist of upcoming awards was revealed last month.