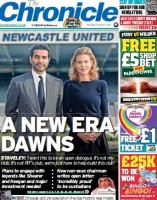 The new owners of a football team thanked supporters via an open letter in a regional daily which praised the club’s new attitude towards access to local media.

Yasir Al-Rumayyan, governor of the Saudi Public Investment Fund, has reached out to Newcastle United fans after he managed to take control of the club.

HTFP reported on Friday how The Chronicle hailed the deal after campaigning for a change in ownership, but also pledged not to back down from “uncomfortable questions” over Saudi Arabia’s rights record humans.

Helen Dalby, Director of Audience and Content for Reach Headlines in the North East, also praised United’s new attitude towards access to local media after a number of battles involving reporters from The Chronicle and of its sibling titles in recent years.

The letter appeared in the Chronicle of Saturday

Speaking on Friday, Helen told HTFP: “Newcastle is a welcoming and friendly city and it is incredibly encouraging to have open lines of communication between the new club regime and the local media from the start, and to hear promises to listen and talk to fans. right away. “

Former owner Mike Ashley’s reign was punctuated by frequent media access disputes, with reporters for the Chronicle and its sister titles The Journal and Sunday Sun being barred from press conferences and club games for more than one year between 2013 and 2014.

In his letter, released on Saturday, Mr. Al-Rumayyan, who will be the non-executive chairman of the club, said: “Thank you to all the fans for the messages of support and encouragement we have received as the new owners of Newcastle. United FC.

“There has been a lot of writing about the investment we have made in the club and we know you want to know more from us about this important milestone in your club’s history.”

He added, “As the new owners, we will be listening to the community.

“Owning this club is not a responsibility we have taken lightly and we will never lose sight of what it means to be part of Newcastle United. “

The Premier League said it had received “legally binding assurances” that the Saudi state would not control the club, despite Crown Prince Mohammed bin Salman being listed as chairman of the Public Investment Fund.

Earlier this year, a US intelligence report revealed that it was likely the prince had approved the murder of exiled Saudi journalist Jamal Khashoggi in 2018.

Saudi Arabia has rejected the report, calling it “negative, false and unacceptable”, and the prince himself has denied any role in the journalist’s murder, while five people were sentenced to death for what was described as a “dishonest operation by a rendition team”. .