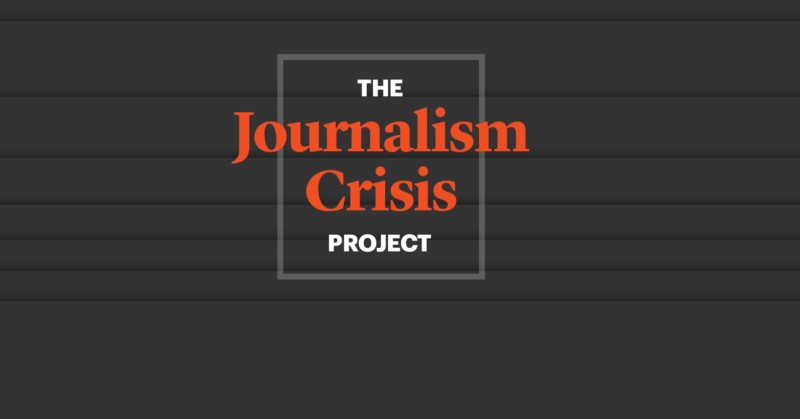 Lessons from the Journalism Crisis Project

When I started writing this newsletter in Spring 2020, it was in an effort to catalog the financial disruption to the media industry caused by the pandemic. As CJR and the Tow Center for digital journalism covered the newsroom cuts, it became clear that even as the pandemic wreaked havoc on the industry, local newsrooms — which have faced attrition for a decade – were the least prepared to weather the storm. So over the next year and a half, this newsletter began to focus more specifically on the current realities facing local newsrooms, with an eye toward a brighter future.

This week marks my last newsletter for the Journalism Crisis Project; soon, I move on to a new opportunity. It has been an honor to write regularly for this audience, and as a parting gift, I want to summarize some of what I have learned in my reporting over the past few years, in the hope that it inspires continued conversation. .

Here are some lessons learned:

ONE: “Local news” comes in many forms, and that’s just the tip of the iceberg.

If you’re a regular reader, you’re no stranger to my repeated reminder that local news includes a lot of stuff; partly, I remember. Even after nearly two years of covering local journalism, the phrase “local news” still conjures up very specific reflexive images in my mind: a half-filled rack of newspapers, a small room full of rambling reporters holding spiral notebooks , fingertips stained with ink. Based on my attention to the national conversation on local news, I’m quite confident that I’m not alone in my chronic narrow thinking.

Often when people use the term “local news”, they are referring to newspapers (admittedly the most beleaguered form of local journalism). Of course, local journalism also includes radio, television, digital media. And localized information includes even more: community newsletters, public forums, library programs. Over time, in an effort to broaden my own thinking and coverage, I have tried to focus on ‘local news’ rather than ‘local news’. Information is the need; the news is only one tool among others to respond to it.

What the conversation really needs is more specificity: let’s be careful to describe what we mean when we talk about “local news”, to better address the failures, benefits and opportunities of each model.

While local newsrooms face unique challenges, they are not magically immune to the issues facing journalism as a whole. There is a considerable amount of research linking the loss of local newsrooms to the loss of government accountability, civic engagement and community; for this reason, it is easy to place great hope in the strengthening of local journalism as the solution to all our civic problems. But just like national newsrooms, local newsrooms operate in an information system that has changed greatly over the past decade, and many of them must also take into account that they have served as tools for white supremacy.

Restoring traditional local newsrooms to their former prevalence and strength will not necessarily resolve historic failures to reach marginalized communities, employ diverse teams, or operate using paradigms that challenge the status quo. (In fact, without focused and concerted efforts to address these failures, they will almost certainly continue). Similarly, while adding more journalists to newsrooms and supporting local news will certainly improve the situation, local journalism will continue to face challenges in rebuilding trust, combating misinformation, attracting readership and navigate political polarization. Although local newsrooms are often better placed national media to solve these problems, these problems plague journalism everywhere, and it will take time, thought and creativity to solve them.

As a journalist for a national news outlet, it’s easy for me to get drawn into generalized conversations about the business and editorial models of local newsrooms. But local news professionals refute my assumptions again and again. Although ad revenue has dropped dramatically across the country, some local newsrooms are still living on ad dollars. While financial failures force some journalists to make sacrifices, others willingly make reasonable sacrifices and see this work as a service. While some newsrooms do not reflect the demographics of their surrounding community, other newsrooms operate in demographically homogeneous communities and therefore face different challenges. Although print journalism is past its prime, people living in places with limited access to broadband connections still depend on it.

FOUR: Be careful what you call insignificant.

From a national perspective, it’s good to highlight the civic functions of local news – its role as a watchdog, its value in building space for local engagement – but it’s also good to celebrate the benefits less important local sources of information: good writing, school sports coverage, community competitions, fiction. These things are important to people, and their value comes up again and again in my conversations with local information professionals.

The local information crisis is tricky because it is vast, varied and difficult to measure. Continued attention to the problem must be focused on people’s needs (a notoriously difficult thing to quantify). I have become convinced that the best way to invest in a solution for local information gaps is to invest attention locally as well as nationally. What needs to be done in your community and how will you be part of the solution?

The Journalism Crisis Project aims to shape our focus on the current crisis and foster a conversation about what’s to come. We hope you will join us. (Click to subscribe!)

EXPLORE THE TOW CENTER TRACKING COVID-19 DISCOUNTS: Throughout 2020 and 2021, Tow Center researchers collected reports of a wide range of cuts amid the pandemic. There is an interactive map and a searchable database. You can find it here. And read a recent report here.

Has America ever needed a media watchdog more than it does now? Help us by contact CJR today.

Lauren Harris is a freelance journalist. She writes CJR’s weekly newsletter for the Journalism Crisis Project. Follow her on Twitter @LHarrisWrites.

We need trusted local journalism now more than ever