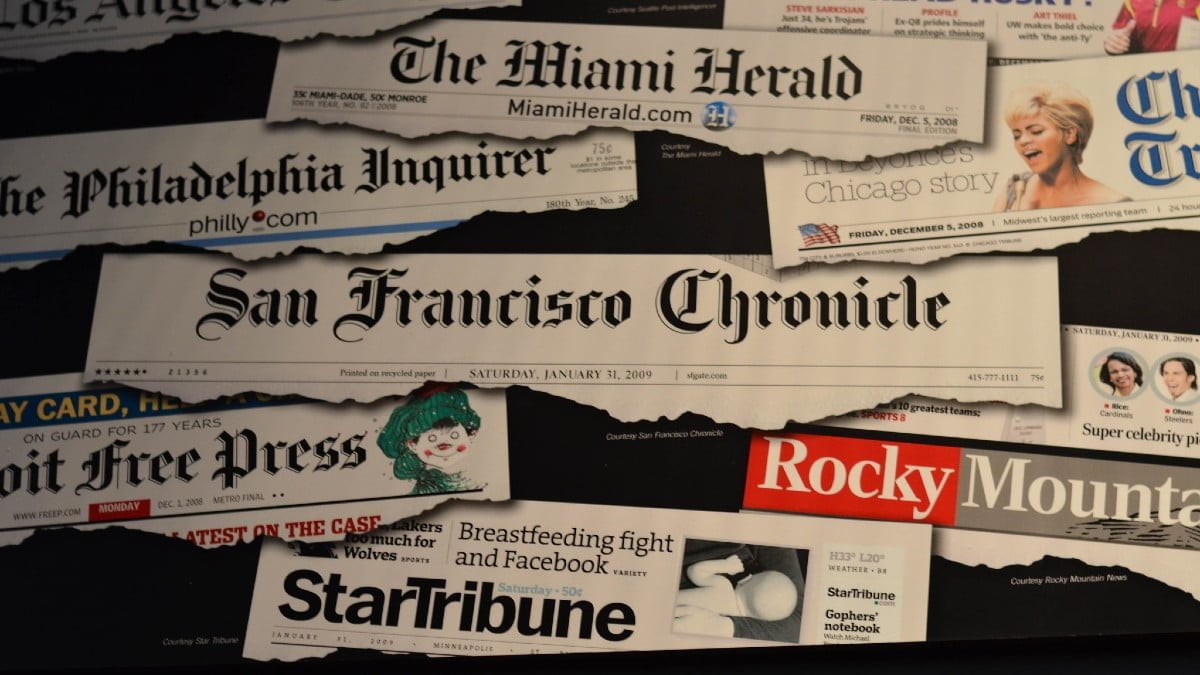 Journalism and opinion do not mix

David Santrella and I have a few things in common. In other areas we have no similarity.

We are both from Chicago and very close in age. Santrella is a graduate of Columbia College in Chicago and I took a few courses there. We’ve both been married to amazing women for about three decades. This is where the similarities end. Today, Santerella is CEO of Salem Media Group; I live in a van by the river and write articles like this.

Oh, and we both love red wine. My bottles cost about 10 dollars; it has a wine cellar.

Not just any wine cellar; it is a work of art. Santrella is remodeling the house and has commissioned a wine cellar from an artist and metal fabricator.

“He creates an incredible piece of utilitarian art,” Santrella said. “Wrought iron. It’s a wine cellar with doors, but it’s something to see.

The wine cellar artist/builder must find a way to maintain the compartment at 57 degrees at all times. With an aesthetic eye, he must figure out how to keep his mechanical art.

Although he said he doesn’t have a favorite wine, he definitely prefers reds to whites.

“The cellar will contain 250 bottles, including 200 red ones. I have friends who have wine cellars, and some collect wines. I select some of them, but knowledgeable friends help me choose some and suggest must-have wines for a complete selection.

When you are C.EO. of a major media company, you think about something other than wine.

“I had a bad habit of waking up at 5 a.m., picking up my phone from the bedside table and starting to read emails,” Santrella explained. “After years of doing this, I felt conflicted. I decided to change this habit and start my day by reading the Bible. Absorb the word of God, not just listen to the radio.

Now his day begins when he removes the Bible from the nightstand.

“I read the Bible once a year,” Santrella said. “I don’t use Bible readings for guidance on a particular day. Whatever my plan for the day, sometimes the readings will talk about it.

It’s not like he’s reading a horoscope. He said reading Matthew 5:16 every year might mean something the next time he read it. Nothing is fixed.

“It’s like looking at a picture,” Santrella said. “The more you look, the more it unfolds. You might not have noticed the butterfly in the photo the first time you saw it. It’s always a little different.

Santrealla was born near Chicago in Niles, Illinois. His father owned a Conoco gas station at the triangle of Milwaukee and Touhy in Niles. He said he spent a lot of time there filling up cars, wiping windshields, checking air pressure in tires and changing oil.

At Maine Township High School in Park Ridge, the proverbial light came on for him. The school had a radio station, WMTH, powered by a 16-watt curling iron.

Santrella came into WMTH when he was 14 and immediately knew radio was what he wanted to do.

“I knew so early on that it baffles me how many kids today have no idea what they want,” he explained. “They seem directionless and they are 24 years old. I don’t pass judgement. I know it’s harder to grow up now than when I was a kid.

Living in Niles, he grew up as a Cubs fan. His wife, Barbara, was a vehement Cub fan.

“When the Cubs won the World Series, I don’t think she sobbed more at our wedding or the birth of our kids,” Santrella said.

In the infamous Steve Bartman incident, he said you could smell the oxygen leaving town. Santrella agreed that anyone else in Bartman’s place would have done the same. Bartman was a drop guy because he had an unfortunate seat under the ball.

He thought he wanted to make a living on the air at Columbia College. While dating Barbara, who worked in the insurance industry, he realized he wanted to marry and have children with her.

“I also knew radio could be a tough life,” Santrella explained. “When you’re moving around from job to job all the time, it’s not conducive to having a family. Not good for children.

At WCRX, Columbia’s radio station, Santrella ripped off a copy of Radio and records magazine on a coffee table and saw a job posting in the Springfield, Illinois market.

“I figured Springfield was not that far away and might eventually lead to a job in Chicago. I could be discovered. It was for a morning guy, and I thought it would be amazing. The next line I read the compensation. It was $8,000 a year plus Burger King coupons.

They basically told the person taking the job that they would earn enough to eat or live. Not both. It was enough to choose one.

“If the job included the Wendy’s and Frosty’s coupons, things might have turned out differently,” Santrella jokes.

During his studies, he said he had the best possible university work in the world.

He worked in marketing at the WMAQ powerhouse in Chicago. He was assigned to drive the WMAQ White Sox van for resort VIPs.

“All I had to do was pick up clients and advertisers and then take them to Comiskey Park,” Santrella said.

He was told all he had to do was pick them up, drive them to the park, be nice, and not take tips. That’s when he had a Eureka moment.

“All of these executives and sales reps lived in nice homes, seemed to live well, and didn’t have to travel around the country as much as a radio personality. That’s when I decided to get into that side of the business.

While at WMAQ, Santrella said he constantly reached out to the station’s sales manager to talk to him.

“Haunting him is more like that,” Santrella said. “I wanted to be in sales, and since I had no experience, he didn’t pay attention to me. So, I managed to land a sales position at WEAW. Plus it was close to my house. I started there and was doing pretty well.

After a while, he worked up the courage to call the sales manager of WMAQ, the same guy he was haunting.

On the phone, he said, ‘Jimmy, this is Dave Santrella. I work here at WEAW in sales and was wondering if I could get your advice on something.

All of a sudden, Jimmy found himself helping Santrella, a guy who didn’t even work for him. A month later, Jimmy called Santrella and said he was setting up a job for him.

“I think he just saw me as a driven kid or just took pity on me. Either way, I got the job.

Change is one of the many constants in life. Of course, some changes are easier than others, especially when you’re the CEO of a big company.

“It’s always about where we’re going as people,” Santrella said. “We have to understand what the important things are and how we achieve them. How we achieve this goal, especially now, going through a real metamorphosis as a company. »

Santrella said to stick to the parts of leadership that you handle well and not dive into the areas where you’re not as strong.

I took that to mean that just because you’re the CEO of a big media company or a hospital doesn’t mean you should be involved in the cogs of all the operations.

Jesus Christ said, “Render unto Caesar what is Caesar’s; and to God the things that are God’s. These are words to live by; they also have good business sense.

“That’s the reality,” Santrella said. “When you go to a restaurant, the owner may not be a chef or know a thing or two about food preparation. I was fortunate to have Phil Boyce, our senior vice president of creative format He works with all of our talent. I just couldn’t get as good as Phil at what he does. I’m a salesperson. My background is sales. If you want me to watch your sales presentation, let me know. tell you how to improve it, I’m qualified to do it If you want to know how to work with talent, talk to Phil.

Santrella said members of his organization approach him all the time when considering making a big change.

“I finally have to approve bigger issues. In the end, I have to trust their recommendations and ideas. If we are not going to renew a contract or if we are going to replace someone on the air, I will ask if there is a reason for these moves, I will ask why this is happening. But I’m not going to jump in unless I think it’s a horrible mistake.

If money is necessary for the survival of any business, for Santrella and Salem, it is not everything.

“We have a mantra that says we want to do well, but we also want to do well while doing good. Money for Salem is simply the fuel for what we do; he provides for the mission.

In a word, impact.

“We want to do things to make people’s lives better,” Santrella said. “Whether it’s helping a family in need or providing assistance in other ways. In the programming that we carry. For Salem, the result of doing good for others is to do well financially.

On the broadcast side, Santrella likes to keep things civilized.

“When we have people opposing us on the air, it’s never a ‘you’re an idiot’ kind of conversation,” he explained. “We may disagree with a position, but we treat them with dignity. We form our own opinions based on facts. We don’t invent anything. We produce our news thanks to the research we have done. This research allows us to form a certain opinion.

Santrella said he and Salem have a deep desire to help others.

“You start with an honest desire to do this and keep that as an undercurrent in your life; you are now giving people something that will help them. It makes things so much easier.

Having a well-stocked wine cellar doesn’t hurt either.