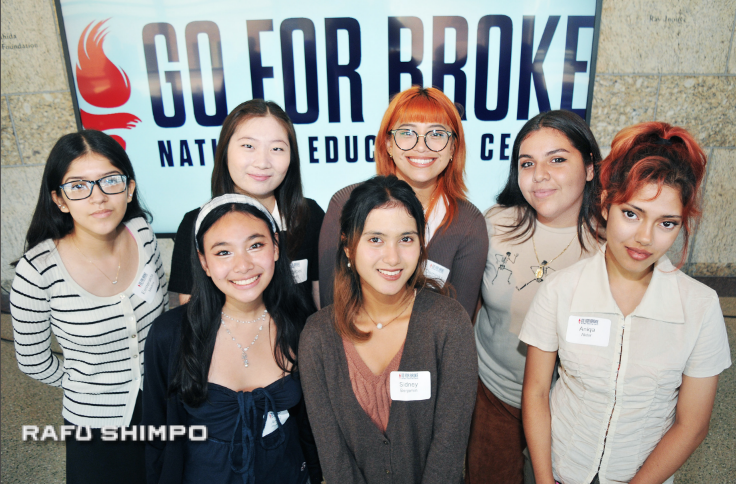 Last Friday marked 77 years since Japan’s signing of surrender documents officially ended World War II. As the years and decades continue their invertible creep, the voices of those who fought and lived through this global cataclysm fade into the silence of history.

The most recent figures from the US Department of Veterans Affairs estimate that 234 World War II veterans die every day. Of the 16 million people involved in the war, only 240,329 were still alive last September; figures are updated annually on September 30.

With the loss of every veteran, first-hand accounts of the conflict that reshaped the world fade away, many disappear – unheard – forever.

As President and CEO of Go For Broke National Education Center, Mitch Maki has made it his solemn mission to ensure that the voices and memories of Japanese Americans who served are not lost.

“We’re telling the story of World War II veterans, and one of the challenges we have is how to take an 80-year-old story and make it relevant for young people,” Maki said Aug. 27. , during a gathering of high school students, teachers and journalism professionals at the Japanese American National Museum.

“We are also working to find ways to make this story relevant to young people outside of the JA community. These are really important issues for us,” he added.

The event at JANM was held to celebrate the culmination of the first student projects at the Go For Broke Journalism Institute, created in partnership with the LA Chapter of the Asian American Journalists Association.

“We had the idea of ​​creating an institute where we give concrete skills to young people, but also we give them history, and their first project must be a kind of report on the experience of JA veterans who are relates to contemporary issues,” explained Maki. “It’s not just a book report, it’s much more involved.”

To map out ideas and write a roadmap for the project, Maki turned to The bone Angeles Times writer Teresa Watanabe, who also sits on the board of AAJA-LA.

“Before I could even express the whole idea, she said, ‘Let’s do this,’ and we created this institute over the summer,” he recalled. “Teresa had contact with Downtown Magnet High School, and the eight students we recruited are all from that school and all happen to be young women.”

Maki noted that none of the students are of Japanese descent – ​​their families hail from countries including Mexico, Korea, Guatemala, the Philippines and Bangladesh.

“They’re all immigrants or children of immigrants, and that’s what’s been so gratifying, how much they’ve connected to the story,” Maki said.

Students were tasked with creating presentations that capture their own understanding of the JA experience through their personal goals as high school students in Los Angeles, as well as their cultural backgrounds. The program connected them with a host of media mentors, including The LA Times, The New York Times and ABC7 News, in addition to the Faculty of Journalism and Asian American Studies at UCLA and Cal State LA

Due to COVID, interviews and conversations for this first iteration of the journalism institute were conducted online. Maki hopes to arrange face-to-face meetings with veterans and mentors in future projects.

It turns out that each of the students in the program has some experience in journalism, through their involvement with their school newspaper.

Charlotte Zomer is an English teacher at Downtown Magnet HS and is a journalism consultant for the school newspaper, The Helios. She said she was thrilled when she was first approached about offering this opportunity to her students.

“It’s been a wonderful experience for them to get resources beyond what I’m able to provide in a journalism course, get real-world applications, and learn from professionals in the field,” Zomer said. . “These stories are ones that we can all relate to, that they’re all really connected to on a very deep level. Maybe we don’t tell these stories enough in the program, and I’m sure they would have liked to know more about this important part of our collective history.

“During my research, I found the story of Aiko Tanamachi Endo, a nurse during World War II. I wrote about how her mother inspired her, how hard she worked in the farm family before she was stripped of her home, how her father encouraged her and her sister to do many different things and develop what they loved. Aiko’s sister joined the nursing corps, and my sister is currently in nursing school; I thought there were a lot of parallels between her life and mine, and I wanted to write about it.

Despite another event to attend earlier in the day, ABC7 news anchor David Ono managed to arrive at JANM early enough to meet the students and share his thoughts.

“What I love about seeing the young faces in this room is the promise of talented, capable journalists guiding us in telling America’s stories,” Ono said. “I feel encouraged for the future of our nation by you.”

Maki said he was delighted with how each of the projects tapped into a common thread, a common thread that was perfectly in line with the Go For Broke spirit: the will to fight for a better future and to work for a more perfect union.

While assembling her project on veteran and U.S. Senator Daniel Inouye, Dominika Tenorio shared how she gained a new respect for the importance of preserving stories.

“This program has opened my eyes to the great responsibility that journalists have for our community,” she said.

Annabel Chung agreed with the sentiment, adding, “I wanted to write a story that helps make sure these topics don’t go away because our regular school curriculum doesn’t include them.”

Through her research, Reyes said the personal kinship she feels with people living, working and sacrificing eight decades ago gives her a lot of relevance in 2022.

“We tend to view history as a grandiose subject, so much so that we become desensitized to everything that is going on around us,” she said. “I think in order to understand and become more caring for others, you need to know more about specific people who have experienced significant events in history. I think we can all understand each other better if it’s on a level very personal.

There is a need for local journalism | Opinion