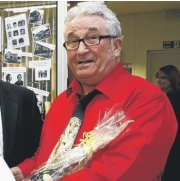 A garbage collector turned chief reporter for a weekly has died at the age of 74.

Tributes were paid to Mick King, who spent nearly 22 years with the Leighton Buzzard Observer.

Mick went to night school while working “on the trash” to get his O-Level in English.

He sent articles to the Observer for printing and was also a freelance columnist before being offered a full-time job by the newspaper.

Former Observer reporter Sarah Holmes, who worked alongside Mick for many years, said: â€œI am so sad to learn of the passing of a friend and fellow reporter, Mick King. Mick has been such an inspiration to me during my 12 years in the LBO.

â€œHe went from garbage collector to journalist with various other vocations in between, gaining a lot of life experience along the way.

â€œIt just shows that great writers and journalists don’t necessarily have a degree. Go drive that big dust cart through the sky, Mick.

His wife Elaine, 70, told The Observer: â€œHe enjoyed court cases and hanging out with the police.

â€œIt really fascinated him, especially when he went to Old Bailey to work on murder cases.

â€œAt one point he was writing reviews for theaters and cinemas. He appreciated everything to tell you the truth.

Mick, who died Thursday after being diagnosed with cancer, is also survived by his brother Stephen.

Iliffe launches “premium” sites as an alternative to paywalls

DNG Media “Close to Deal” to Save Banbridge Chronicle