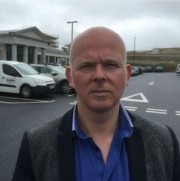 A weekly newspaper fought back after its reporters were dubbed “clowns”, asked to resign and said they “should be ashamed” of online attackers.

The Falmouth Packet has hit back at readers who see journalists as a “fair game” for abuse after a recent wave of attacks on its journalists.

The attackers were criticized in the Packet’s ‘Skipper’ column in which he also referred to the departure of chief reporter Lee Trewhela, pictured, from rival headline Cornwall Live.

HTFP reported last month how Lee, who previously worked on The Packet, cited social media abuse as a factor in his decision to quit the regional newspaper industry after 30 years of service.

The Skipper’s column said: “While his loss to the industry is sad, which is even sadder is one of the reasons he gave for his decision – the systematic online abuse of journalists, almost daily. “

He added: “Unfortunately, this is something every journalist can appreciate and understand.

“In the last week alone, Packet reporters have been told they are ‘a clown’, that they should quit and ‘be ashamed’ – anyway, just to report issues that other people must ask us for help, and for quoting this. anybody.

“Imagine if someone walked into your house – and remember this is where all reporters work now, for at least part of the week – would point their finger in your face and start yelling, ‘You should. to be ashamed ! “

“You would probably think of calling the police. But because it’s on a computer screen, it’s deemed acceptable and journalists are considered a “fair game”, just like MPs (who, let’s remember, are also just human beings with feelings and families ultimately).

“#Bekind is so quoted these days that it almost loses its meaning, but for those who find the above behavior acceptable, let me ask a question: would you be happy if someone did that, and why else are you doing it to someone else? “

From the Editor: Journalism, like freedom, is not free | Chroniclers