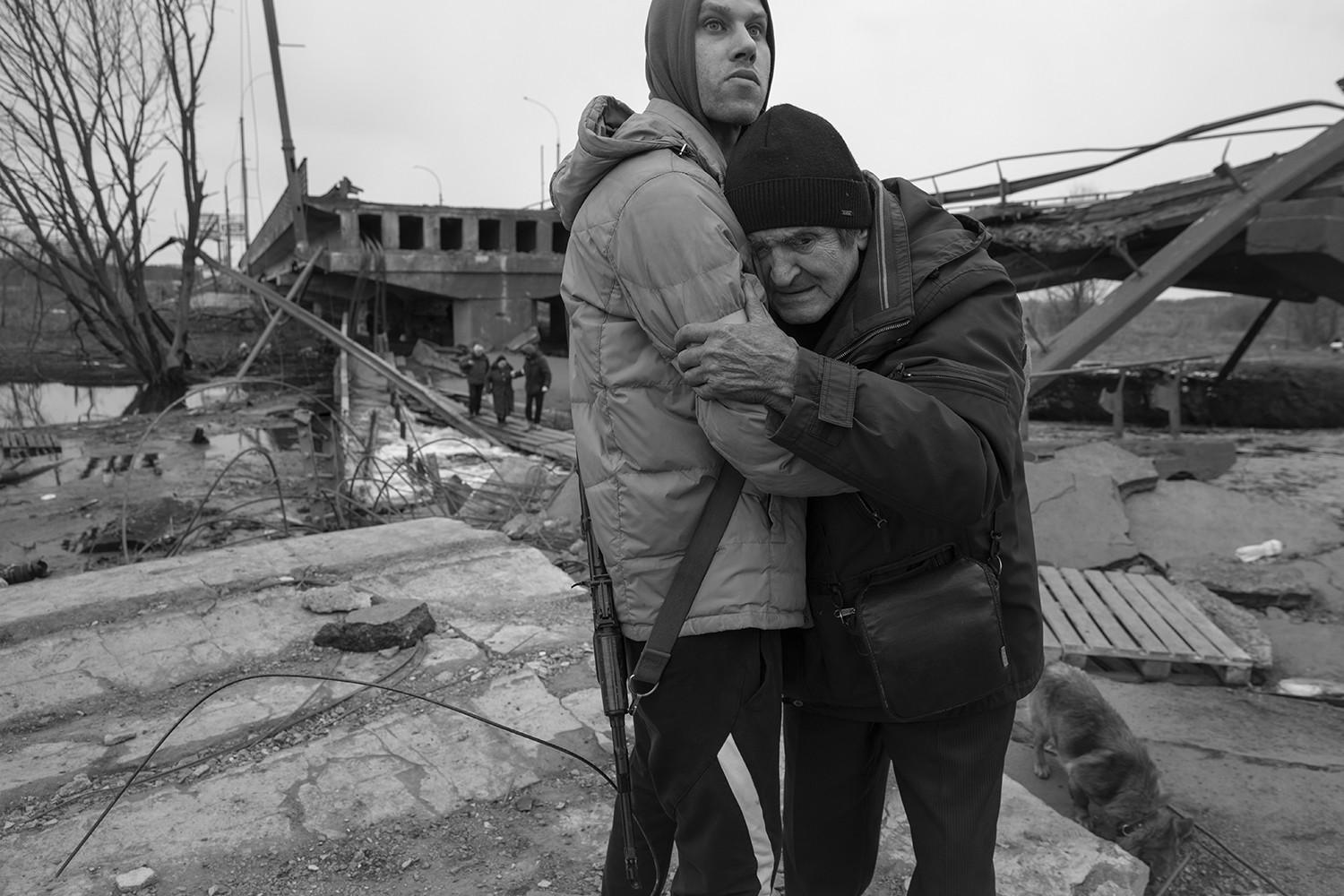 They came. Almost all of them are here: Nachtweyboth Turnleys, Bouvet, Delahaye, Chauvel, Haviv, Van der Stockt, Yaghobzadeh…
The legends of photojournalism of the last century, the stars of the golden age of reportage.
And surprisingly, most came at their own expense for lack of guarantees; They came to testify anyway!
A wonderful article tells this story.
It’s signed Laura Haim one of the most brilliant French journalists, and who lives in New York.
It is published in the online magazine Air mail of Graydon Carterthe legendary former director of vanity lounge.
Read this article by Laura Haim. It will go down in history as the swan song of an endangered expression: photojournalism and its favorite medium: paper magazines!
Jean Jacques Naudet

He made his decision while tending to his roses in his garden in Paris. When French photographer Patrick Chauvel, 72, heard that Russian troops were gathering at the Ukrainian border, he said: “I’m not going to garden while all this is going on. Chauvel had a mission to Paris Match for a report in Saint Petersburg. During a stopover at Amsterdam airport, he calls his editors to tell them that he is heading to the Ukraine instead and instructs a young writer to pick up his bulletproof vest at home.

Chauvel, married five times with five children, is a veteran of 34 conflicts and got his start as a Vietnam war photographer at the age of 19. He is just one of many battle-hardened photojournalists who are old enough to collect Social Security and have decided to put retirement on hold to cover the largest mobilization of forces Europe has seen since 1945. He This is a bittersweet reunion, and perhaps a farewell round of service for the men and women who have documented horrific conflict around the world for 50 years.

Chauvel’s friend and colleague, Alfred Yaghobzadeh, 64, was injured in Lebanon and Chechnya and taken hostage in Gaza. He arrived in kyiv a few days after Chauvel without assignment. Yaghobzadeh’s agent at the time told me he thought Chauvel was in hospital in Paris for a check-up.

James Nachtwey, the prominent elder Time-magazine combat photographer whose career spanned Northern Ireland, Afghanistan, South Africa, Rwanda, Bosnia, Palestine, Chechnya and Iraq, and who in his youth has often been compared to Robert Capa, is also in Ukraine at his own expense. Nachtwey was working in Afghanistan when the invasion happened and immediately packed his bags and traveled five days nonstop from Kabul to Kyiv, arriving in time to celebrate his 74th birthday.

In one text, Nachtwey says he went “to express a sense of outrage and a sense of compassion; hold accountable the perpetrators of these crimes against humanity; to add my contribution to the critical mass of information that will enable change. (Before Nachtwey boarded the train for Kyiv, he sent a group text message: “Arriving with three bags by train. Without a car, I could definitely use an elevator if someone is in town and not not busy shooting.”)

Battle-hardened photojournalists who are old enough to collect Social Security and who have decided to put their retirement on hold to cover the largest mobilization of forces Europe has seen since 1945.

Luc Delahaye, 60, is also there, as well as former colleagues like John Stanmeyer, 58; Laurent Van der Stockt, 58; and David and Peter Turnley, 66, identical twin photographers. There are many female war correspondents, including American photographer Heidi Levine; Martha Raddatz, ABC News correspondent, 69; and Karen Lajon, 63, journalist for The Sunday newspaper, who explained her decision this way: “I may be an old lady now, but this job is my calling. This is the the story of my life.”

Many of them have paid for their own trip to Ukraine without postings, contracts or any expectation of being paid for their work. War photography is more dangerous than ever. The invasion is less than a month old, and three journalists have already died under Russian fire: the American documentary filmmaker Brent Renaud; a Fox News cameraman, Pierre Zakrzewski, who was an Irish citizen; and a freelance Ukrainian journalist, Oleksandra Kuvshynova.

However, the activity has decreased considerably. Newspaper budgets have dried up, and magazines like Time no longer give extended contracts to photojournalists. Much of the work has been replaced by 24-hour news channels, social media and raw footage recorded on smartphones by civilians. Photographers pay for their own equipment, satellite phones and, too often, life insurance.

The old-school camaraderie, however, is still intact. The veteran journalists weren’t surprised to pass each other when they arrived in Kyiv, older, graying hair and stiff joints, but still ready for action. For lifelong war correspondents, the battle for Ukraine is, as Chauvel joked, “like a nursing home for smokers.”

Ron Haviv, 56, a member of the “Bosnia group”, journalists who bonded 30 years ago to cover the siege of Sarajevo, explained: “Sometimes it takes us a moment to recognize each other, given the time that has passed, and most of us have gray hair, but the general feeling is as it always has been: people interested in documenting history, showing the world what’s going on, and hoping that there will be a reaction by working together.

Youth is not always an advantage. Some veterans expressed concern about the lack of experience of some young reporters who covered some demonstrations in Paris during the yellow vests protests and are now encountering real fighting for the first time. Chauvel said he had to tell a younger colleague “not to wear a helmet in the car near checkpoints so as not to be mistaken for a soldier”.

For lifelong war correspondents, the battle for Ukraine is, as Chauvel joked, “like a nursing home for smokers.”

And some arrived in kyiv with their own sons, who became photographers, including Frédéric Lafargue, 54, and his son Raphaël, 26, and Yaghobzadeh and his 31-year-old son, Rafael, born while his father was covering the First World War. Gulf.

“For security reasons, I am staying in another hotel,” Yaghobzadeh said. “But I call him every day.”

Even some of the most hardened veterans say they are touched by the scenes of defiance and bravery and by what French photojournalist Eric Bouvet, 60, called “the human dignity of the people”. On International Women’s Day, Bouvet put his camera down for a minute to carry flowers brought by husbands to their wives across a checkpoint in Irpin.

Bouvet almost gave up photojournalism. He covered Chechnya and the Russian attack on Ukraine in 2014, but like so many of his ilk, his work has dried up in recent years. He said no one picks up the phone when he calls to present an international story and he often has to wait months for a simple “no” to his ideas. He became so frustrated that he simply stopped calling editors and invested his own money to work on his own. He covered the coronavirus pandemic in French hospitals for two years. Although he was able to sell a few photos, it wasn’t enough.

He decided to give up and spend the summer climbing in the French Alps and trying nature photography. But when the crisis broke out in Ukraine, he bought a one-way ticket to Kyiv without hesitation and without asking anyone for a mission. “I was there in 2014,” he says. “Right now, this is the most important event of the 21st century, and I want to be there to document it.”